I’ve had Megan Whalen Turner’s The Queens Thief series on my must-read list for years. But you know…so many books so little time. So I randomly decided to just read them. I had just read a ton of Maria V. Snyder, Garth Nix, and others, and I want something in the same vein. Well this series wasn’t that exactly, but it was amazing and so well-written with character depth and interesting, twisty plots.

Gen (Eugenides) is the thief of Eddis and hero of the series. While you expect him to be one thing—a thief and all the stereotypical behaviors inherent therein—he’s something else entirely: highly intelligent, strategic, cunning, brave, loyal…and childish. The charm of Eugenides is that he’s several things at once, both positive and negative. In some ways he’s highly mature, and in other ways he’s a big baby (not surprising for a teenager/young adult). You so very rarely see such a full personality in literature that includes all aspects of a person, not just the good qualities.

The Magus is the king of Sounis’ wise man and primary advisor. He first meets Gen in order to take advantage of his thieving abilities (or blackmail Gen into helping him), but the two become unlikely friends. The Magus’ primary purpose is to save Sounis from the Mede Empire, even if that means allying with Eddis and Attolia to do so. The change in the Magus’ opinion of Gen, the ability to reconsider pre-conceived, makes the Magus another interesting character that’s persists in surprising the reader throughout the series.

Sophos is the king of Sounis’ heir and nephew, and he’s under the tutelage of the Magus, which is how he meets Gen. The thief and the heir become friends, even as the two seem to be on opposite sides of things when it comes to their respective countries. Sophos has little interest in politics and fighting; he’d like to read and learn, but he finds that as heir to the king and the last hope of Sounis, he must rise to meet the challenge of rule.

Helen is the queen of Eddis, a mountainous kingdom located between Sounis and Attolia, and Gen’s cousin. She’s young, but well-loved of her people. He single goal is to preserve her people. She’s willing to sacrifice her personal happiness to save her people from a danger more unstoppable than that of the Medes.

Irene is the queen of Attolia. Like Helen, she is young, but unlike Helen, she’s had to bribe, threaten, and blackmail her barons to remain in charge. As a result, she’s hard, cold, and sometimes cruel, but she’s also soft, forgiving, and kind. This dichotomy in character shows how queenship can destroy a soul, but also how love can save it. She has a soft spot for a certain thief, and the two of them might be able to team up to save Attolia from the greedy Medes.

Costis is a young guard in the queen of Attolia’s employ. Eugenides uses him to win over the people of Attolia and foil several plots, but the two eventually become friends.

Kamet is a slave to one of the highly placed Medean ambassadors. While he assumes that all he wants to do is serve his master and gain a great deal of power for himself as a slave, he finds that the backward kingdoms from the Little Peninsula have a different plan for him. Maybe freedom isn’t as underrated as he’d thought.

Sounis, Eddis, and Attolia lie on the Little Peninsula of the Continent. The two bigger, more populous countries—Sounis and Attolia—are separated by the mountains and the country Eddis, which lies between them and controls the only routes of trade between the two. They exist in an uneasy alliance. Sounis would like to conquer—or marry into—Eddis and Attolia, but the latter two queen-led countries only want their autonomy.

Eugenides, the Queen of Eddis’ thief, inserts himself in the political machinations to first win autonomy for his queen, and then increasingly to outwit the Medes, who live across the sea and are trying to manipulate all the kingdoms of the Little Peninsula to gain a toehold on the Continent. If this were to happen, the three countries would cease to exist and become usurped—and the people replaced—by the invaders.

In the end, it will take the alliance of Sounis, Eddis, and Attolia; Eugenides’ intelligence and tactical brilliance; and the courage of a few strategic outsiders to keep the Medes at bay. 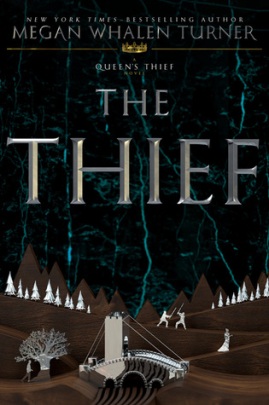 In The Thief, Eugenides is in the king of Sounis’ dungeon for stealing his personal seal (and bragging about it) until the Magus, the king’s primary advisor, comes to visit him. The Magus has a plan: Gen steals a precious stone for the kingdom and regains his freedom. Unsaid is the fact that the stone will force the queen of Eddis to marry the king of Sounis; the queen will lose her autonomy, and the king will have a way to invade nearby Attolia. Gen agrees, but he’s smarter than the Magus suspects. Much smarter. Plus, the old gods and goddesses are involved, and they have very specific ideas about what should happen.

This book was a surprise. When I started, I was under-impressed with Eugenides’ character. He was whiny and childish. But then I started to suspect that there was more to him than I first thought. Then I suspected that he was the true puppet master in the story. Then…I was blown away. He has one of the most intriguing personalities of any fictional character. He’s always surprising the reader. He makes this book awesome.

The Queen of Attolia:

In the Queen of Attolia, Irene, who was only a peripheral character in the last book takes center stage when she catches and punishes Eugenides for spying on her for the queen of Eddis. This, along with encouragement from the Mede ambassador in Attolia, catapults both countries into a war that can only be stopped by forgiveness…and perhaps even love between foes. Because the Mede invasion is imminent, and the countries of the Little Peninsula must be united, not torn apart.

This is my favorite book of the series because it shows that what we see in people is not necessarily who they are. The queen of Attolia might seem cold and brutal, but she’s much more than that, and only someone who has been in a position to really watch her—say, a thief who also acts as a spy—can see the truth. It also shows that forgiveness—to forgive and be forgiven—can redeem a soul, a person, and even a kingdom.The characters are complicated, flawed, and beautiful. They find depths within themselves that they didn’t know were there. This is a book about love and redemption, two of my favorite themes because they are so relevant to life, whether inside the pages of a book or out.

The King of Attolia:

The King of Attolia opens up with Costis, one of the king’s guard, punching the very king that he’s supposed to be protecting. This action puts him in close contact and intimacy with the king throughout the book, and his opinion of the young, impetuous Eugenides begins to change. He sees more in the queen’s chosen consort that he expects to see, and he starts fighting for the king out of love and loyalty. But where Eugenides is concerned and the ever-present threat of the Medes, there are plots within plots, danger, and surprises.

I love this book (no surprise) because we get a look at Eugenides and Irene from a completely new perspective: that of a lowly guard. Eugenides has plans, but as the readers, we’re not privy to them—we only know what Costis knows—so there are delightful surprises in store. Plus, we see Costis change and develop as a character and form a bond with the king that’s heart-warming, a bond which both will need as politics is a dangerous matter.

A Conspiracy of Kings: 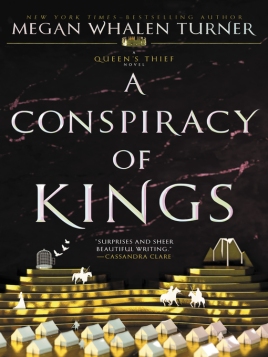 A Conspiracy of Kings takes us to Sounis and Sophos. As the heir to the kingdom, Sophos has many enemies, especially when those enemies (and even friends) happen to be in league with the Medes, who want to disrupt Sounis as much as possible in order to get that toehold on the Little Peninsula. Sophos’ enemies capture him, starting the beginning of an adventure where he learns the value of hard work, intrigue, friends, and faith. His journey takes him to Attolia, Eddis, and back again in an effort to unite the Little Peninsula countries for a greater good.

By the time I got to this book, I already realized I was a fan of Eugenides, so I was a little disappointed that the book wasn’t focused on that unpredictable, madly intelligent character. But he does make an appearance, as does Irene, his queen; Helen, his cousin and queen of Eddis; and the Magus of Sounis, who braves dangers to protect and help his young friend, so the teams back together…and I loved it! It was a great story with complicated politics and intercontinental intrigue to create an engaging plot. 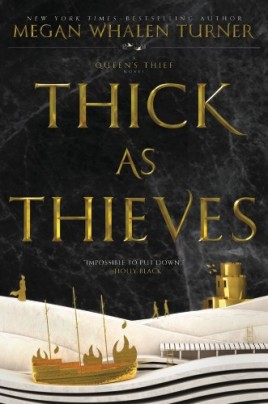 Kamet, a slave to the Mede ambassador from The Queen of Attolia, is performing his regular duty in the household of his master in the Mede Empire across the sea from the Little Peninsula in Thick as Thieves. Life’s good. He serves the brother to the emperor’s heir, has more power than most free men, and has reasonable expectations of even more power and wealth to come. But an Attolian turns his entire world upside down, and he finds himself being chased by murderous Medes. What’s even more surprising as his status has Mede’s most wanted is his evolving feelings on both freedom and his Attolian friend.

Per usual, Turner sets out a fairly straightforward series of events that don’t remain straightforward. What you think will happen twists and twists again and characters that you think you have pegged keep on surprising you…in good ways. While Kamet was not my favorite character, I found myself growing to like him, and then there’s the Attolian whom I love. And Eugenides makes a cameo appearance because he has scheme in place—of course.

I’ve been hearing about Megan Whalen Turner’s Queen’s Thief series for years—in good ways—so when I started The Thief, I thought, “Well this is…okay, I guess. But I’ve read better.” And then I kept on reading and kept liking the book more and more. And then I had to read the other ones, because what more will Eugenides do? The political scope, the intercontinental politics, the scheming and intrigues, it was all so well-written and executed, that I found myself impressed despite my first impressions (which is actually why I don’t hold to first impressions when it comes to books—and I can actually see wider applications for that philosophy). More than just the plots, I loved the characters, the way they grew not just within the books themselves, but within the entire series while still remaining distinctly themselves. There are some hard moments to read and some equally beautiful ones. This series is definitely a must read. I can’t wait for the final book in the series, Return of the Thief. If you want to wait and read the entire series together, the last book is scheduled for release March 19, 2019 (and yes I have that on my calendar already).