I’m not gonna lie, I studied Russia this year mostly because she was a major power during World War II. I’ve always felt like Russia was kind of a jerk country, that bully with the hick haircut and bad teeth that makes life miserable for others. So I guess Russia has always been the backwards, mean kid on the playground. And I wasn’t totally wrong…or right. Let me explain. 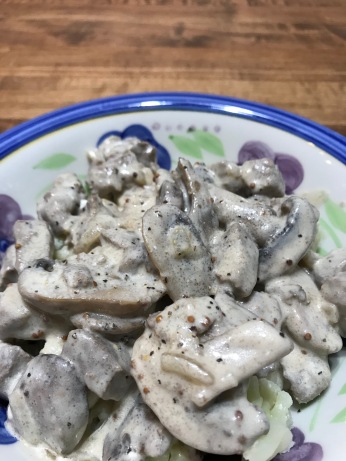 ‘Tis the season for eat, so for this very reason I didn’t go to a Russian restaurant. I just don’t have the free calories (or meals) to do it. Not that there’s a huge selection of Russian cuisine here anyway. However, I did cook traditional Russian food: Beef Stroganoff:

Apparently sour cream really makes this dish. In fact, Russians put sour cream on everything. Probably the way we put ketchup on everything (except sour cream doesn’t have high fructose corn syrup so is probably healthier). Also I heard Russian sour cream is better than our American version. This dish, heavy in the mushrooms because I love love love them, was surprisingly simple and delicious. Basically it’s beef stock (though you could probably just use water in a pinch),whole grain mustard, onions, mushrooms, beef, and butter…and then magic!

Before getting into my very tumultuous feelings of Russia, here’s a brief overview of the country (thanks to A Brief History of Russia by Michael Kort):

What Russia Has Taught Me:

Like Poland, Russian peasants didn’t start out in the dire straights in which we found them in the last few centuries. They were once much more free and then digressed. But their digression, their loss of rights and even humanity, is the worst I’ve read so far. Russia has taught me that:

Russia isn’t that snaggle-toothed bully; the majority of Russians are victims of the few, the corrupt, the evil, the wicked. Like Stalin, the author of between 10 and 20 million deaths (not to mention the 27 million dead of World War II). What I’ve really seen, though, is that a country who doesn’t learn from her mistakes is bound to repeat them, and Russia seems to be on the verge of repeating them. Instead of real freedom, the people are oppressed by an overweight, power-hungry government. Even now.