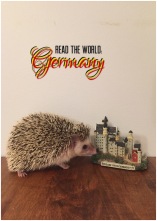 Anna Funder’s Stasiland: Stories from Behind the Berlin Wall was my nonfiction pick for Read the World: Germany. I’m not gonna lie, I picked this partly because it was easy to find. It actually wasn’t my first choice, but I’m grateful that it fell into my lap because it was just the book that I was meant to read.

The story she begins and ends with is about Miriam who, as a teenager and opponent of the regime, became an enemy of the state. Not only did she serve time in prison for her dangerously radical views of talking with protestors rather than hosing them with water, but she married a man who was caught up in the same East German madness with no fault of his own (or her own). What happens to Charlie, Miriam’s husband, makes the story interesting and unresolved.

Some stories involve men who worked for the Stasi and are completely unrepentant, and those who are trying to bring about the resurrection of the communist government. There are those Stasis who were only doing their jobs and others who couldn’t get out because of threats made against them or their families. There are stories about the strength of a mother’s love vying with her integrity. Stories about kidnappings and murder and desperate attempts at escape. These stories, in short, are about those people who lived behind the wall and still, in some ways, continue to be haunted by it:

“Does telling your story mean you are free of it? Or that you go, fettered, into your future?”

“ I look up at the angel’s long face and I think of Miriam and Julia; lives shaped, too, by the Wall. Will they let it go? Or, will it let them go?”

As I read Anna’s words, I think about the walls in my life, those things that have created a clear divide between “then” and “now,” between who I am and who I was. We all have them. I think we forget that the Berlin Wall wasn’t just a political barrier. It was a barrier of freedom and growth. It created something within that nation and within those people that, even now, is hard to describe and impossible—for those of us who weren’t incarcerated behind it (because it was a prison)—to understand. It was, and continues to be, a scar in the psyches of generations.

Anna describes this in the best way she can: through the stories of others. The fact that she wrote those stories around a period of her life, that they just don’t stand alone, makes the book more compelling. We find out what the tellings meant to her and what they can mean to us. All these stories intersect at her, a girl from Australia who wants to understand and learns more than she ever bargained for.

Read this book so that you can really begin to understand: the story of the Berlin Wall is the stories of the people who lived behind it. It’s beautiful and sad and filled with pure expressions of the best of humanity. And the worst.