Weeelllll…this book was super-long, and I listened to it. At double speed. It still took me a month of running to get through the 57 hours of audio. I’m not sure I would have been able to make it through the 1,280 pages of text in that time.

The Rise and Fall of the Third Reich starts with Adolph Hitler and follows him through his life, focusing on his politics and the organization of the Nazi party. With meticulous detail, William L. Shirer explains those events that molded the man into the infamous dictator, gave rise to World War II, and formed a government that flourished and then floundered. A war correspondent in Berlin during the war, he’s in a unique position to provide insight into the minds of the people at the time. 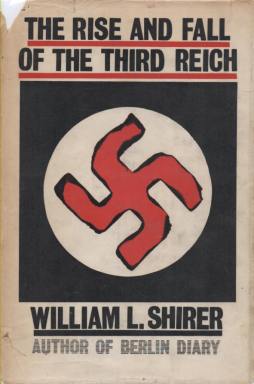 It all start with Hitler who wanted to be an artist as a child. When his father didn’t agree to support this dream, the boy refused to try in school. Inevitably he dropped out of school once his father died and happily lived off his mother and relatives until she died as well. At that point, he went to find his fortune, for lack of better words, in Vienna. He wanted money to live on, but he didn’t want a job. Which is a problem.

If it wasn’t for World War I, there’s no telling how long he would have lived homeless on the Vienna streets. But once he became a soldier, his path started to unfurl in front of him. He started associating with a socialist party and rose through the ranks. Through manipulation, propaganda, and—admittedly—some impressive public speaking, he managed to place himself as chancellor of Germany, once the prime minister died so did Germany’s republic. The rest is, literally, history.

I knew intellectually that Hitler was something of a mad man. I mean, you can’t murder millions of people with a matter-of-fact, blasé attitude without being crazy. But after reading this book, after the peek I had into his mind, it’s my opinion that he was a completely, repentantly psychopathic monster. He was the worst type of psychotic: brilliant and psychotic. They do the most damage, and he was the tool of the deaths of multitudes.

He was lazy and had no sense of responsibility. Narcissistic. Nothing was his fault. Someone else was always to blame. This book was closer than I ever wanted to get to the man.

Now, my thoughts on the book: it was good. Mind opening. There was some great detail about Hitler and the Third Reich, but not nearly enough about the actual war or the other participants. I know that Shirer was creating a comprehensive history about the German government, but I thought some of the details were superfluous, especially when they didn’t move along the plot in any way.

I’ve always believed that people shouldn’t be afraid to read about the unsavory side of human history as long as they don’t descend into the abyss. However, I think I could have learned as much about the war with another book without having to subject myself to Hitler’s madness. If you’re a big WWII geek, read this book. Otherwise, there are tons of other options.