I completely forgot about the December book club because, you know, the madness of the holidays. As we did a book exchange instead of reading a book, I’m going to review the book I chose to give in the exchange: The Perilous Gard by Elizabeth Marie Pope. This is one of my all-time favorite books—probably because it combines history with adventure, fantasy, and a dash of romance—and has been since I was a wee thing. I discovered it in my parents library and secreted it away into my private collection when I left home. 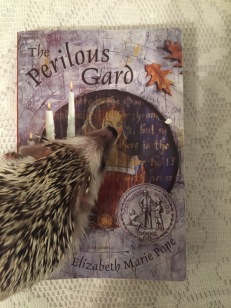 This book takes place in the mid-1500s—sandwiched between the reigns of Queen Mary and Queen Elizabeth—in nowhere, England (or rather, Elvenwood, which is pretty much in the middle of nowhere as far as the characters are concerned). A lady-in-waiting to Princess Elizabeth, Kate Sutton is banished to said podunk-town because of complaints her sister makes to Queen Mary.

This is where the adventure starts. This small little hamlet is surrounded by mystery. The daughter of Sir Heron, under who’s guardianship she’s placed, is mysteriously missing; pilgrims often come to the “magic” well by the castle; and both the castle folk and townspeople seem to know more than they’re letting on, about the little girl’s disappearance and her uncle’s subsequent self-loathing. Kate, an outsider, is in a position to see that something’s truly wrong. However, she gets a little too curious and finds herself in a difficult situation.

Kate, our heroin, is a strong character. She’s not beautiful or outgoing, so she suffers with an inferiority complex (especially when comparing herself to her lovable sister). On the other hand, she’s brave, smart, and observant, seeing things that those around her would rather she not. Christopher, the supporting character, suffers with an overinflated sense of responsibility, willing to do anything, even sacrifice himself, for others. They make unlikely friends and create a strong bond.

I love that this book looks at the clash between Christianity and the old pagan religions that existed before Christianity swept the land. Loosely based on the “Ballad of Tam Lin,” an old fairy story about mortals caught up in the dealings of the fey, Elizabeth Pope asks the question: What if the story of Tam Lin and other fairy stories are based on reality? What if the fantastical fair folk or fey or fairies or whatever you want to call them are really just remnants of pagan religions? The answers to those questions—especially paired with an adventurous young woman and a tortured young man—end up creating an intriguing story.

The beauty of the prose, paired with an intricate plot that’s not overly complicated and a delicious insight into history, makes this one of my favorite books.