Reading the Arabian Nights (or One Thousand and One Nights) was a long time coming. I mean, a loooooooong time. You can’t see it, but that expression on Lizzy’s face is relief. I started this book last summer and just couldn’t make myself read it at my normal clip. It became THAT book I looked sideways at on Sundays (my designated classic book day). But, I’m happy to say that eventually my snail’s pace paid off, and I can now place it in the done column (and I do have a done column—it’s called by 2016 Book List and I proudly put down every one that I’ve read this year).

Now, on to the review:

Don’t read this book if you are offended by old-(very old)-fashioned ideas of women. The book was translated to English in the early 1700s, and the individual tales date to the Islamic Golden Age—somewhere between the 8th and 13th centuries—so women were viewed as property (which is not terribly far from the Islamic view of women today). That being said, this book is the genesis for many of those fairy tales that we know—thanks in part to Disney: “Aladdin’s Wonderful Lamp,” “Ali Baba and the Forty Thieves,” and “The Seven Voyages of Sinbad the Sailor.”

The book begins when a king was cuckolded by his wife (actually two brothers and each a king, but Shahryār is the older brother and main character). This scarred him. However, instead of getting drunk and showing up at his exe’s houses in the middle of the night to shout obscenities like any reasonable man, he went on a killing spree. Yes, one of the main characters was a serial killer. He married a woman each night and killed her in the morning. Until Scheherazade. Scheherazade was the oldest daughter of King Shahryār’s advisor. She knew that the kingdom wouldn’t last with a murderer on the throne, so she offered to marry him.

Instead of just accepting her fate, she spends the night telling the king tales. He’s so enthralled, that he spares her life the next morning in order to hear the ending of the story. However, the next night she ends one story just to begin another, and thus begins the 1,001 nights. 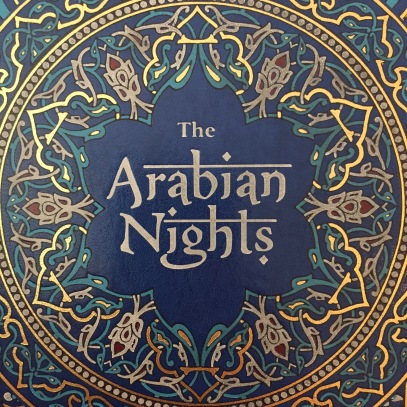 By the end of the book, so much time has passed (along with the birth of children) that the king has fallen in love with her and can’t bear to kill her.

The tales were actually very interesting and taught morality, much like fables, but the worst part were the names. People, and places, had the craziest, most unpronounceable names. Plus, there seemed to be seemingly random apostrophes placed in the middle of perfectly good names. Other than that, the stories were engaging. A good book to read if you want to get a glimpse into another culture.