I’m not gonna lie, this has been one of my favorite trilogies. I know, you read the cover and think, “Aliens. Again? Why would I read this?” Because it’s about MORE than aliens. It’s about humanity. The beauty of the series is that you don’t really realize this at first. You get little hints here and there when Cassie says, “I am humanity,” but you don’t really understand how the concept of the human condition is central to the series.

So, as a recap, in the first book we learn about the five waves of alien invasion, the fourth of which is the Silencers (aliens in human skins who kill any humans who happen across their territory) and the fifth of which are human children trained to kill other humans (who they think are aliens).

In the second book (close your ears if you haven’t read it) we find out that—bah bah bah bum!—the Silencers aren’t actually aliens. They’re humans who THINK they’re aliens. As babies, they were downloaded planting false alien memories with this program that booted up during puberty. This is important because it means that there are no aliens on Earth. In fact, there are no aliens in the mother ship orbiting Earth. There are NO aliens in the solar system or probably galaxy. What we do know (through one of the few humans working with the aliens who actually know what’s happening) is that the aliens are attempting to save the planet and the humans. They are burning the village to save what.

“Whaaaat?” you ask. Exactly. You find out exactly how the aliens are trying to accomplish this, and it’s rather brilliant. I give Rick Yancey credit that he came up with an amazing, unique concept in science fiction, so revolutionary that it really straddles that border between sci-fi and philosophy. It’s an explanation of civilization, of humanity, and of the human spirit. And it all boils down to one word…

[before continuing on, know that I’m going to go on to summarize the rest of the book, more for my own benefit than for yours. So if you haven’t read the book, STOP here]

Yup, it all comes down to love. Which I already knew, but the way Rick Yancey incorporates that is amazing.

So back to burning the village to save it. Aliens have been studying human civilization of thousands of years. They watched as humans built up civilization to such extent that it threatened the Earth (now, for the sake of argument, let’s pretend this is happening. I’m of the opinion that the Earth is much stronger than puny humans). The aliens decided that in order to preserve life, that of all the living organisms on Earth including humanity, they had to purge the Earth of most of the people because people are apparently the problem. So during the five waves, the human population was whittled down from about 7 billion to 140 million, 2 percent of the original number. In fact, the final step or wave (the sixth?), is the aliens bombing every single remaining city—and by aliens, I mean the humans doing their bidding—resulting in only a few million humans. 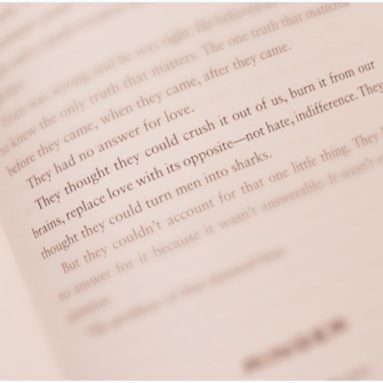 However, this isn’t the only solution to the “human” problem. During the millennia of recon on humanity, the aliens realized that the essence of humanity is trust and cooperation. It’s in our nature to congregate and build, so just destroying 99.9% of the population won’t accomplish anything because we will eventually rebuild. The aliens knew that to keep humans from rebuilding and bringing the Earth to the brink of ruin again, they had to change the fundamentals of human nature; they had to destroy human nature.

To this end they came up with the five waves. Each of the waves was designed to destroy human trust in each other. For instance, the EMP destroyed communication; the tidal waves destroyed everybody who lived in close proximity to each other (and the coasts); the virus taught humans not to be close to others in fear of catching the disease. The Silencers taught humans that nobody could be trusted. The fifth wave trained the next generation to kill, to give over humanity to revenge and blood. The last wave, the bombing, was meant to destroy all the remaining cities and cities are the oldest human settlements, the conglomeration of human knowledge and civilization. It was to be the crowning moment and destroy the essence of human nature. All survivors of the waves would lose the ability to trust others, to form bonds and trust and the ability to cooperate and build. We would be little better than animals.

That was the plan. Destroy humanity to destroy the human problem and preserve the human race. Easy peasy lemon squeezy. Simple as pie.

Back to our favorite characters: Cassie and Evan. Evan’s a Silencer, a human who thinks he’s an alien. He’s also in love with Cassie, and the head human-who-knows-he’s-a-human-but-is-willingly-helping-the-aliens (he’s a jerk, right?), Vosch, wants Evan Walker because somehow the alien program downloaded into him has a glitch in it. They need to figure out what went wrong so they can fix the program. The entire alien plan hinges on the program, on the idea that take away humanity and you take away the human.

So Vosch captures Evan, and Cassie goes after him. Not only does she find Evan, but she finds out how to destroy the mother ship and destroy the last wave before it can level all the cities: she takes a pod up to the ship and blows it and all the bombs, and herself, up.

Before you assume that this is the type of book where the humans somehow rally and destroy the aliens, don’t. The humans win in that they avoid the last wave, save millions of lives, destroy the mother ship (even if it is alien-less), and keep their humanity. In the end, we see Cassie’s friends, including her little brother, starting to rebuild, teaching the next generation to love and trust. Love truly is the most powerful force on Earth:

“Because love is the most dangerous weapon in the world. It’s more unstable than uranium.”

While I’m at it, here are a few of my favorite quotes from the book: